I have always loved Lucy. I watched I Love Lucy reruns as a young child in New Jersey with a trusted babysitter, where the show was run in the morning. I laughed out loud and became entranced by the antics of Lucy and Ethel. I had kindergarten in the afternoon back then. I also watched The Edge of Night because my sitter loved it, and became hooked myself.

Decades later I became the editor of Soap Opera Weekly, and an editor, writer, and author of books about Lucille Ball and classic TV…who says life isn’t predestined?!

When I discovered Lucy and her Ethel (Vivian Vance) were doing a new TV show (The Lucy Show, 1962-1968), I routinely begged my family to watch it—on our only TV—on Monday nights. To their credit, I got to watch it nine times out of 10. My mother may have held a residual grudge, though—years later, walking into my New York apartment, she noted dryly, “You have more pictures of Lucy here than you do of me!”

So how did I morph from obsessed fan into a highly regarded, um, well-respected, er, okay, slightly known award-winning author of celebrity bios and TV trivia books, whose footprints and signature are in cement in Jamestown, N.Y., Lucy’s hometown and site of The Lucy-Desi Museum (see pic)? If you’re still with me, read on.

As I got older, the special fondness I held for Lucy and Viv (and various other Sitcom Queens, truth be told) only grew. When I graduated from BU with an MS in communications, I felt it was only prudent to communicate, and began a career in publishing as a journalist and editor. I have written about everything from area rugs to pop music, from counterfeiting to colorization, but my favorite subjects are show business-related, especially classic TV and golden age movies. In 2003, I finally landed my dream job: as copy chief, then editor, at Soap Opera Weekly, where I was mandated to watch TV during work hours…every day. How horrible!

While languishing at a dot-com startup circa 1999, I began writing a biography of Lucille Ball, based on everything I’d read and known, at the urging of my best friend, and fellow languisher, Craig Hamrick. Once it got to be more than 10,000 words, we realized it might make a good book. Craig suggested an A to Z encyclopedic format because it denoted research and depth (and would be easy to organize!).

For years, I pored over the endless files on Lucy, Viv, Desi Arnaz, William Frawley, I Love Lucy, et al, at the New York Library of the Performing Arts at Lincoln Center, and watched rare videos at the Museum of Television and Radio. I even, during this period, got over my fear of the vastness of the New York Public Library at 42nd Street, and found it was quite user-friendly. Waiting for me there was a Dewey Decimal card for the long-forgotten I Love Lucy play, an interesting artifact from the days when almost any successful property was tried out in other media.

Back at the Lincoln Center library, paging through Lucy’s past brought me to a Broadway play, also long forgotten—Nobody Loves an Albatross—in which one of the lead characters was based on Lucille Ball; it was written by a former (and somewhat disgruntled) Desilu employee. I was able to interview one of the show’s co-stars, Marie Wallace (again, through Craig; Marie had starred in the original Dark Shadows, among many other TV and stage productions, and Craig was a DS fan and author). This led to a script in the rare manuscript section by humorist Max Shulman (Dobie Gillis): a never-produced movie script of Nobody Loves an Albatross, for MGM.

As I made these discoveries—which were pure gold to a Lucy fan like myself—I wondered…how many people (other than Marie, of course) remembered the Broadway production of Albatross, not a huge success? Of that handful of people, even less knew that a movie script based on it had been written…and discarded.

The Lucy character in the film version of Albatross—a slick, seasoned star and con artist, much less likable than the character had been in the Broadway show—runs a studio and has her own sitcom. Shulman’s script shows one scene being shot of the Lucy character and her sitcom friend, described as a “Vivian Vance” type, baking cream puffs and ruining the kitchen when everything explodes. Sound familiar? It was unearthing these kinds of priceless, hidden or forgotten Lucy facts that struck me as being most valuable and interesting to other fans. 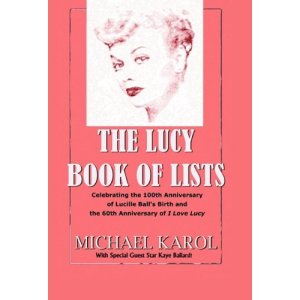 Lucy A to Z: the Lucille Ball Encyclopedia was published in the fall of 2001, coinciding with the 50th anniversary of I Love Lucy. The book proved so successful (Lucie Arnaz wrote me that it was a “godsend” in helping her and her brother, Desi Arnaz Jr., prepare for the I Love Lucy 50th Anniversary Special that year) that I produced three further editions. The Fourth Edition (published in 2008) is more than three times the size of the first one, and includes 50 exclusive pictures, some from my personal collection.

Those books were followed by Lucy in Print (a look at how the press dealt with Lucy and her TV co-stars); The Lucille Ball Quiz Book; Sitcom Queens: Divas of the Small Screen; The TV Tidbits Classic Television Book of Lists; and The Comic DNA of Lucille Ball: Interpreting the Icon. Even I was ready to call it quits…but when I realized that 2011 would have been Lucille Ball’s 100th birthday, and was also the 60th anniversary of I Love Lucy, I couldn’t resist. And so The Lucy Book of Lists was published in 2011.

I do occasionally tackle subjects other than the Lucyverse, as I call it, such as my best-selling book The ABC Movie of the Week Companion, published in 2008, and the novel KISS KILL: A Vampire’s Tale, published in 2009. Warning: Life Ahead! is a chronicle of my struggles in adulthood to deal with change, death, unemployment; I’m hoping to publish it this year.

I’ve been an invited guest at various nostalgia conventions—including many Lucy Fests held in Jamestown and sponsored by The Lucy-Desi Museum, and the Big Apple Comic Con—where I’ve served on author panels, led trivia contests, and mostly enjoyed meeting fellow fans. I’ve been interviewed on many radio shows, including WCBS-FM New York, the biggest “oldies”/nostalgia station in the country. In April 2008 I was featured on Internet radio station KSAV’s popular show, Talking Television. I’ve been quoted and reviewed in various national magazines, from niche market publications like Rue Morgue and Classic Images to mass-market magazines like The Star.

I’ve also been quoted and referenced in other books about Lucy (Stefan Kanfer’s 2003 Ball of Fire), comedy (Lawrence Epstein’s 2004 Mixed Nuts: America’s Love Affair with Comedy Teams), and powerful women (2008’s How to Be Like Women of Power: Wisdom and Advice to Create Your Own Destiny). I have written for and been interviewed on the Internet by sites like Theofantastique.com and The Terror Trap. My own website thrived from 1996-2014, when I converted it to a Facebook page. I manage four FB pages and two blogs, one of which…well, you’re already here, aren’t you? And, dear reader, please know that I very much appreciate it!

Stay tuned for updates. And thanks for visiting.