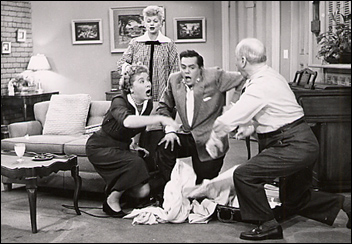 On one of my favorite topics, the Huffington Post’s Lily Karlin blogged last year about “Why Lucille Ball Was More Revolutionary Than You Think.” She noted, “While most know Ball paved the way for future women in comedy, they may not understand the exact magnitude of her influence on Hollywood. More than 60 years after I Love Lucy began, the ramifications of Ball’s groundbreaking strides are still hugely present in the television industry.” Specifically, Karlin made five excellent points (I combined two of them into the second one, below):

1. I Love Lucy broke barriers with its depiction of pregnancy. Though the show was beaten by a 15-minute kinescoped sitcom, Johnnie and Mary, which was almost too discreet in alluding to the star couple’s new infant, I Love Lucy, Karlin wrote, broke barriers simply because the show was such a huge hit and its cast and production company were the best on TV. The episode “Lucy Goes to the Hospital” had more of a legacy influence, on the public, on culture and on TV. That episode, in fact, drew more than 70 percent of the audience at the time, and thanks to countless reruns and it’s appearance on DVD, it is speculated that the episode might be the most-watched TV episode of all time. (Pic at top left shows the main cast in that classic episode — Vivian Vance, Lucille Ball, Desi Arnaz and William Frawley — doing what they did best: making us laugh.)

2. Lucille Ball was not only a TV star: She had major power behind the scenes. She was vice president of powerhouse studio Desilu, and after she and Desi Arnaz divorced, she bought his shares, and took the title of president, becoming the first female studio head in Hollywood.

3. Ethel and Lucy’s female friendship was way ahead of its time. On I Love Lucy, Karlin wrote, “Ethel and Lucy were constantly getting up to their own adventures, without falling into Hollywood’s ugliest tropes about women friend pairs.” And Rookie magazine noted: “Even though it was sometimes Lucy and Ethel versus the world (or just Ricky and Fred), they always cooperated with each other. They were around the same age, from similar economic backgrounds, and were both happily married.” Their relationship existed on an essentially even playing field, so stereotypical female competitiveness plots — over men or status — never entered the picture. Their relationship was a source of constant mutual support.

4. Lucille Ball had to fight the network to portray Lucy and Ricky’s “multiethnic”* marriage. The show’s sponsor (Philip Morris cigarettes) and network (CBS, duh!) were against Arnaz playing the role on TV that he played in real life. Ball refused to do the show without him. Ball won. Actually, everybody won. Especially us.

Finally, if I might point this out, as unnecessary as it seems,  I Love Lucy is, at its core, just plain laugh-out-loud funny. It remains so after 65 years and countless reruns. It is the seminal sitcom, the progenitor of all that followed. The show continues to be a perennial ratings favorite wherever it’s run (in countless countries and languages) because it speaks the universal truth of laughter. Laughter is the best medicine. We need it more than ever to cope with our ever-stressful lives. Lucy and company keep delivering. That’s why we still watch.

*Note: The following clarification ran with Karlin’s blog: “A previous version of this article referred to Ball and Arnaz’s relationship as interracial. More accurately their relationship is multiethnic, inasmuch as Hispanic is not a racial category, according to the U.S. Census.”