Premise:
Housewife Lucy Ricardo wants more from her life than housework. Specifically, she wants to get into showbiz à la her husband, Ricky, who’s a semi-famous bandleader. She is aided in her schemes by neighbors/landlords Fred and Ethel Mertz.

I Love Lucy took off right from the start and was the Number 3 prime-time TV show in its first season. After that it held on to the Number 1 spot every year it was on except for the 1955-56 season, when The $64,000 Question pushed it to Number 2.

The familiar animated heart that opens the show was actually created for the syndicated reruns of the series. The original openings featured animated stick figures of Lucy and Desi, playing hide-and-seek around a cigarette pack that was one of their sponsor’s (Phillip Morris) products.

Desi Arnaz and Lucille Ball invented the concept of syndicating TV shows as reruns when they insisted the series be filmed in L.A. and distributed across the country. Formerly, stations outside the area where a show was produced got a visually inferior kinescoped copy, one that was taped from a TV monitor during broadcast. Film lasted (relatively) forever, and because CBS wouldn’t pay for filming the episodes, Lucy and Desi shouldered the cost. Thus, the Arnazes brokered a deal whereby they owned the filmed episodes of I Love Lucy. When Desi and Lucy sold the 180 episodes of I Love Lucy to CBS in the late 1950s, it was a landmark $5 million deal that marked the beginning of syndication profits for off-network reruns of hit TV shows. 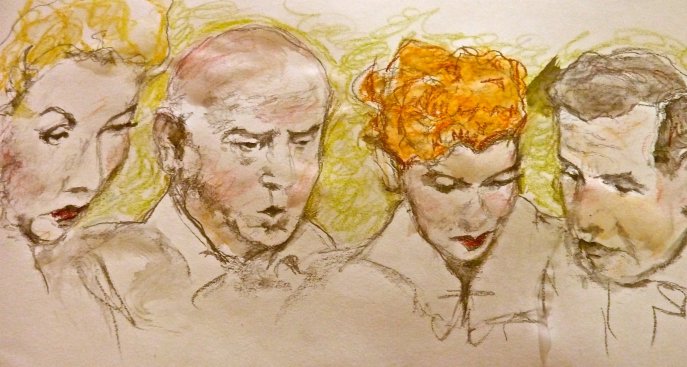 The Fab Four, as I like to call them: Vivian Vance, William Frawley, Lucille Ball and Desi Arnaz

Vivian Vance was hired on the recommendation of first-year I Love Lucy director Marc Daniels; he took Desi to San Diego, where Vance was appearing in The Voice of the Turtle. Desi was hooked, and hired his Ethel without Lucy having met her. The first rehearsals were a bit tense, but once Lucy realized what a fine actress Vance was (she’d honed her talents on Broadway during the 1930s and 1940s), Lucy warmed up to her co-star. Vance won the first-ever Emmy for Best Series Supporting actress, in 1953, and was nominated for playing Ethel Mertz three more times in the 1950s.

William Frawley, one of Hollywood’s best-known character actors, lobbied for the part of Fred Mertz. His cantankerous personality, plus his penchant for heavy drinking, made Desi think twice, but not for long. He met with Frawley, told him he had the part, but that if alcohol ever interfered with his performance, he was out. Frawley agreed, and there was never a problem during I Love Lucy‘s long, successful run. Frawley was nominated for an Emmy five times in the 1950s for playing Fred Mertz.

Vance and Frawley were inducted into the Academy of Television Arts & Sciences’ (ATAS) Hall of Fame together in 2012, making I Love Lucy the only television series that is itself in the Hall of Fame, and has had every one of its major cast members inducted individually.

The rumors that Vance was required by contract to be heavier than Lucy, so as to appear frumpier, were fueled by a fake “gag” contract given to Vance as a birthday gift by Lucy in the 1950s, which Vance jokingly read on air (to Lucille Ball) in the 1970s on the Dinah talk show. In it, Vance was admonished to gain weight every year, and keep her hair color five shades lighter or darker than Lucy’s, among other things.

Frawley and Vance were not fond of each other in real life; the feud began when he overheard Vance moan about playing a woman that was married to someone “old enough to be her father.” From then on, it was war. It didn’t help when Vance refused to do a spin-off featuring the Mertzes after I Love Lucy ended its run, dreading the prospect of being stuck acting opposite Frawley for years to come. To both their credit, however, this hostility did not interfere with filming I Love Lucy; it might have even helped the way they portrayed the fractious Mertzes. They created real, believable characters for the small screen.

Desi matured into a true business genius, building Desilu Studios into the premier producing facility of its day; its filmed output at one point rivaled many of the major Hollywood (movie) studios. Desilu eventually bought and absorbed RKO Studios, where both Lucy and Desi had worked in films in the 1930s and 1940s.

Arnaz also perfected the three-camera shooting technique that is used to this day, with I Love Lucy’s Oscar-winning cinematographer, Karl Freund; three cameras cobbled together (film editor Dann Cahn referred to it as the “three-headed monster’) captured close-ups, medium shots, and long shots, which were then edited, using the best shots of each angle to create the show.

I Love Lucy was the first major TV series to incorporate the pregnancy of its star into the plot of the show. When Lucy gave birth to Little Ricky on the air, and Desi Jr. in real life on the same day, the event overshadowed President Eisenhower’s inauguration in the newspapers the next day, and got one of TV’s biggest viewing audiences and a record 71.7 rating (meaning more than two-thirds of the total viewing audience was tuned in). That record was finally broken several years later when Elvis Presley appeared on The Ed Sullivan Show. Still, due to the fact that I Love Lucy has never been off television, in dozens of countries, it has been estimated the “Birth of Little Ricky” episode is the most-watched single television episode in broadcast history.

Much was made about Lucy’s red hair, which, of course, couldn’t be seen in black-and-white. The color was given to her when she worked at MGM studios in the 1940s, by famed movie hairstylist Sydney Guilaroff. Lucy photographed so beautifully in the Technicolor process that Hollywood crews nicknamed her Technicolor Tessie. She wore the trademark red-orange hue ever after (though longtime hairstylist Irma Kusely preferred to call the color apricot).

On the show, Lucy was the only character allowed to make fun of Desi’s fractured English, because the love between them was obvious. When any other person did it, it just seemed mean.

I Love Lucy was more than loosely based on Lucy’s radio hit, My Favorite Husband, which had run on CBS for three years (1948-’51). Head writer and producer Jess Oppenheimer, and writers Bob Carroll and Madelyn Pugh, wrote the radio program as a series of interactions between two couples, one younger and less established, the other older and more conservative, and adapted many of the same scripts for the TV show that followed.

In My Favorite Husband, the older couple was voiced by Gale Gordon and Bea Benaderet, both of whom Lucy wanted for the TV series. But Gordon was already committed to Our Miss Brooks, and Benaderet was playing neighbor Blanche Morton on The Burns & Allen Show.

I Love Lucy was still Number One in the Nielsen ratings when Lucy and Desi decided to call it quits. They wanted to go out on top, as opposed to running the concept into the ground. It remains one of the few shows to exit network TV at No. 1 (the others are All in the Family and Seinfeld).

Lucy and Desi were not done with the characters of Lucy and Ricky Ricardo, however. They resurrected them (and the Mertzes) for 13 hour-long episodes of The Lucy-Desi Comedy Hour (which will be covered in my next post), broadcast as part of the Westinghouse Desilu Playhouse from 1957-1960.

In 2015, The Hollywood Reporter published its list “Hollywood’s 100 Favorite TV Shows,” based on repsonses from “thousands of industry insiders”…and I Love Lucy came in at No. 8, an unbelievable achievement, and the only show of its era to make the Top Ten. THR wrote, “Its influence continues to be felt today (without Lucille Ball, there would be no Amy Poehler, Tina Fey or Amy Schumer), with Lucy popping up where least expected. ‘I have it on in the background [of my trailer] constantly,’ says Guillermo Diaz, who plays the former Black Ops assassin on ABC’s current hit, Scandal. ‘It keeps me from going to the dark side.'”

Lucille Ball noted, before her death in 1989, that she was happy knowing that she had made so many people laugh. She’d be ecstatic to know that Lucy, Ricky, Fred and Ethel continue to do so, 65 years on.