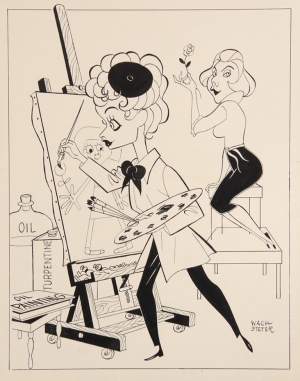 Lucy returned to TV after a Broadway break (she starred in the musical Wildcat in 1960-1961, until exhaustion forced her out of the show). The Lucy Show was an immediate hit out of the gate, proving that audiences still loved her, even without a Ricky/Desi figure to rein her in. The situation was helped by having Lucy’s friend and comedy partner (and the erstwhile Ethel Mertz), the inestimable Vivian Vance, playing opposite Lucy.

Vivian (who’d had plastic surgery in between I Love Lucy and this series) looked dynamite, and insisted in her contract that her character be called “Vivian,” to help the audience forget her as Ethel. She portrayed the first divorced woman who was a regular character on a prime time series.

Based on the book Life Without George, and featuring three very likable kids—not cookie-cutter TV offspring—as the girls’ children, The Lucy Show was a delight, especially as it found its footing in the first two seasons, which were filmed in black-and-white. Audiences clearly adored Ball and Vance as a team, and when the two of them worked their magic—on stilts, installing a TV antenna, trying to fix a broken shower and nearly drowning, clowning on an electric mattress—the result was classic TV comedy.

The addition of Ball’s longtime co-star Gale Gordon as the blustery (what else?) president of Lucy’s bank in Season Two (replacing character actor Charles Lane from the first season) signaled a change in the direction of the show, and not necessarily a good one. The interplay between Lucy and Mooney (I always thought he barely acknowledged Vance’s character on the show) was fun shtick, to a point. But as the series ran on, and especially after Vance departed (she left after the third season, tired of her weekly East-West Coast commute), the Lucy/Mooney stuff became increasingly irritating and repetitive.

The show seemed to lose its heart with Vance’s departure in 1965. Lucy relied on guest stars for the remainder of the show’s long run (until 1968) to fill Vance’s place, but no one could. Pal Ann Sothern stepped up to the plate for a half-dozen or so episodes, as a dissolute “Countess” who needed money, and she worked well with Lucy…but she was not Vivian. The success of any particular episode began to depend on how much viewers enjoyed the guest star of the week, and how well he/she fit in to the “Lucy” format.

As an example, when the guest was legend Jack Benny, as in the season six episode “Lucy Gets Jack Benny’s Account,” and the plot involved Lucy scheming to get his bank account moved to Mooney’s bank by building Benny a break-in-proof vault, the results were fine, clever and satisfying. But they were more often misfires.

Still, the audiences were far from tired of Lucy, and kept the show in the Top Ten for all six of its seasons. In fact, in its final season, 1967-1968, The Lucy Show exited as the Number Two show on TV.

Lucy had an end-of-season tradition: saying she wasn’t sure if she was coming back the following season. She always re-upped, but usually only after CBS came to the party with more money and steadfastly assured our favorite redhead how important she was to the network’s schedule (which, in fact, she was…for quarter of a century).

Ball might have had more incentive than usual to end The Lucy Show. It had begun life in 1962 as a Desilu production, and remained one. Since Lucy had sold her (and ex-husband Desi’s) company to Paramount in 1967, she no got profits from the show as an owner. By ending it and creating Here’s Lucy (coming soon) under her own banner, Lucille Ball Productions, at Paramount, the ball (pun intended) was squarely back in her court.