01.16.09 Review: Behind the Laughter
What makes us laugh, and why is it so good for us? Lucille Ball, of course, was one of the main sources of laughter during the last century. If timing is everything, Ball had it in spa 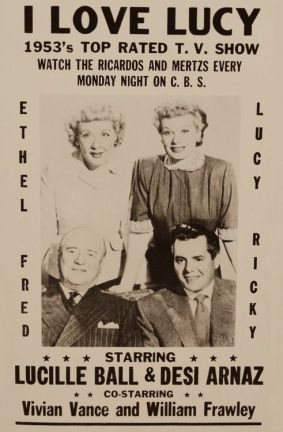 des. That said, Lucy had lots of help along the way to becoming our greatest comedian. She had 20 years to perfect her timing in the movies, some it spent learning from legends Harold Lloyd and Buster Keaton; she had fabulous writers and behind-the-scenes experts who knew what she could and couldn’t do best, and could direct, film, light, costume and edit her to a fault; and she had actors and fellow laugh-makers like her husband, Desi Arnaz, Vivian Vance, William Frawley, Gale Gordon, Bea Benaderet, Mary Jane Croft, Mary Wickes, Doris Singleton, and so many more whom she kept at her side, performing with her. PBS is making a grand stab at explaining why the top comedians were and are so funny in its six-part hour-long series Make ’Em Laugh, airing January 14, 21, and 28; Lucy & Co. are represented in at least two episodes: episode two, which aired January 14 at 9 p.m.: “Honey, I’m Home! — Breadwinners and Homemakers,” about the genesis and growth of the sitcom; and episode three, airing January 21 at 8 p.m.: “Slip on a Banana Peel: The Knockabouts,” about slapstick comedy, of course.
“Honey, I’m Home!” was an okay hour focusing really on just five or six sitcoms. It started with a neat digital tribute to I Love Lucy: host Billy Crystal “walked into” the Ricardo’s living room, “standing” between the Mertzes and the Ricardos, noting the popularity of I Love Lucy and how Desi Arnaz created the modern sitcom we know today. It was followed by 52 minutes of so-called “experts” expounding on the best of the bunch, including six-minute segments on The Goldbergs; I Love Lucy; The Simpsons (did you know cartoonist Matt Groening created Bart as a “What if Leave It To Beaver‘s snarky Eddie Haskell had a son”?), Norman Lear’s groundbreaking All in the Family, and Seinfeld. Though the show was good as far as it went, there were two glaring errors:
— An unforgiveable factual error had narrator Amy Sedaris stating that I Love Lucy ran for five years, when, in fact, it ran for six. For four of those six years it was the No. 1 show, a feat surpassed only by All in the Family; and
— Many of the most popular sitcoms of the 1950s and 1960s were dismissed with a mere mention or photos during the intro. Which is the problem with these types of retrospectives: there’s never enough time to include everyone that needs to be included. That makes us Lucy lovers lucky she’s so important to TV history — there’s never a doubt Ball and her classic co-stars will be included in such roundups.

01.26.09 File in the “You Never Know Where Lucy Will Pop Up” category…. The other night, across the street from my apt., was a group of trailers from a movie being shot in the cit

y (we see them all the time in New York). As I walked past the first one, there were two doors on it facing the sidewalk. On one was a sign that read “LUCY,” and on the other door a sign that read “DESI.” I smiled, thinking, “What’s up with this? Is there actually a movie being shot about them that I hadn’t heard of?” (Didn’t think so.) “Perhaps that’s a film set tradition, or a recent one, so that people won’t know who the real stars are?” (A bit more plausible.) Or maybe just this particular filmmaker’s idea of something cute. Or perhaps a classy way to disguise where the crew bathrooms are kept during the shoot. (Bingo! Do I have to tell you which is for men and which for women?!) Of course, Lucy and Desi did make the film The Long, Long Trailer, so in that sense it’s ironic/cute/funny that someone put their names on…a trailer.The real point is, as I passed it, it made me smile — and that’s what Lucy and Desi have been doing for more than 67 years. 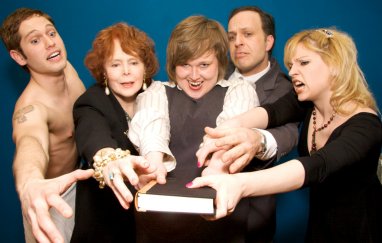 avorite redheads — actress, photographer and all-around great dame Marie Wallace (Dark Shadows, Somerset, Gypsy and Nobody Loves an Albatross—which featured a character based on Lucille Ball, and which you can only read about in my book, Lucy A to Z— are just a few of her showbiz credits), [was] starring in an off-Broadway play called The Chiselers (that’s Marie second from far left in pic, next to hunky Nick Matthews). The (then-)new comedy/mystery ran Feb. 26-March 7, 2009, on Thurs., Fri., and Sat. at 9:30 p.m., at the TADA! Theatre, 15 West 28th St, 2nd Floor, between Broadway and Fifth Avenue. Tickets were $18 (seniors, $10) and reservations were recommended. Break a leg, sweetie! [For the record, she was a total riot, as was the entire cast.]

03.04.09 Lucille Ball and Carol Burnett (below) had one of show-biz’s most enduring mutual admiration societies. Lucy caught Burnett in her star-making performance in the musical Once Upon a Mattress, and went backstage to let Burnett know how much Ball loved her. Lucy called Carol “kid,” and told Burnett “Call on me if you ever need me.” Which Burnett proceeded to do for her first CBS special, Carol + 2 (also with Zero Mostel) and many times more through the ’60s, ’70s and ’80s. Likewise, Ball had Burnett guest-star on The Lucy Show four times and twice on Here’s Lucy. Burnett was there to induct Lucy into the TV Hall of Fame, and Lucy sent flowers to Burnett every year on her birthday. In the 2008 PBS series 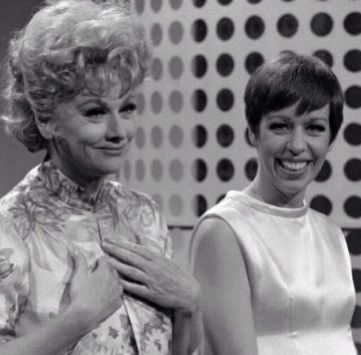 , Pioneers of Television: Variety, Jim Nabors, a friend of both women, told this anecdote: “I was sitting with Lucy one night, and we were watching Carol do a sketch…. Lucy was very much an analyst, and she said, ‘The kid’s the best there is.’ [laughs] And I said, ‘Well, you did pretty good yourself!’ And Lucy says, ‘No, I’m different, I’m different.’ And she was talking about her comedy. But she did say she thought Carol was the best sketch artist that had ever come down the pike — or ever would.”

04.25.09 Television and the theater world lost one of its greats today; Bea Arthur passed away at the age of 86. Arthur began her more than 50-year career on stage, found fame there (and a Tony award as Best Featured Actress in a Musical for Mame in 1966; she was also the original Yente the Matchmaker in Fiddler on the Roof), but grew larger-than-life

on the small screen. First Arthur was the indomitable, wisecracking Maude (1972-’78, 1977 Emmy Award as Best Actress in a Comedy), then she portrayed indomitable, wisecracking Dorothy on The Golden Girls (1985-1992, winning another Emmy as Best Actress in a Comedy in 1988). Though some might argue she played a variation of her Tony-winning role, Vera Charles, forever after — and she repeated the role in Lucille Ball’s film of Mame in 1974, above — it was simpler than that: she was a smart, intelligent comic and dramatic actress, who had her audience in the palm of her hand, and also possessed razor-sharp timing that rivaled Jack Benny’s. Arthur last appeared on Broadway in 2002, when she took her popular one-woman show to the Great White Way for several months. She was inducted into the Television Hall of Fame late last year, and in 1986 was one of those who saluted Lucy on stage when Ball received the Kennedy Center Honor in Washington, D.C. Of Lucy and the much-maligned Mame, Arthur noted in 2002 that, “Lucy was a brilliant, brilliant clown, but she was … miscast. But we would never have gotten the money for the production if she hadn’t wanted to do it. Lucy was lovely [to work with]. She was really the reason I did it; she insisted I do it.” Her fellow Golden Girl Betty White was quoted, after Arthur’s death, as saying, “Bea was such an important part of a very happy time in my life and I have dearly loved her for a very long time. How lucky I was to know her.” How lucky we all were to have been blessed with the much-needed laughter Arthur gave us. 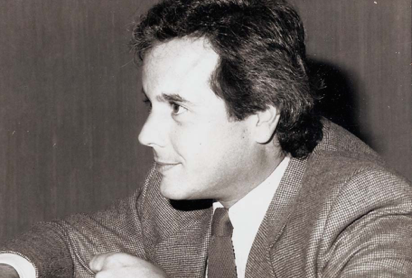 05.07.09 A Sitcomboy Website Exclusive! In honor of the upcoming Jamestown Lucy-Desi Days Festival, held over Memorial Day Weekend, I thought I’d post an exclusive photo that hasn’t been seen in over 20 years. In 1988, my friend Craig Hamrick was attending college in Kansas, and Desi Arnaz Jr. was a spokesperson for a group called Success Without Stress. He visited Craig’s college, and Craig, a reporter for the campus paper, did an interview with him, and took this shot. The most memorable thing about the interview, Craig later told me, was how upset Arnaz got when a young female reporter asked him how it felt “to be Little Ricky” on I Love Lucy. Of course, Arnaz was not Little Ricky (that part was played by Keith Thibodeaux, who is a guest at this year’s Lucy-Desi Days) and was a bit, shall we say, angered at constantly being asked that question. The full story is in my book, Lucy A to Z: The Lucille Ball Encyclopedia. Craig, who was my best friend, died of cancer in 2006, but in addition being a great writer and author, he was a fab photographer, as you can see. So enjoy this rare picture of Lucille Ball and Desi Arnaz’s real son, not Little Ricky. Nor did he ever play Little Ricky. I hope we’re clear on that. 😉

06.08.09 Almost 50 [now 60!] years ago (1960), Lucille Ball divorced Desi Arnaz, packed up her kids and belongings, and moved to New York to appear on Broadway in Wildcat. Although critics were harsh to the show itself, they liked the music (by Cy Coleman and Carolyn Leigh), and, as usual, loved Lucy in the role of tomboy-ish Wildcat “Wildy” Jackson (drawn by Al Hirschfeld at left). She played a wildcatter (what else with that name?) out to strike it rich. The play was an immediate hit thanks to Lucy’s presence in it, and featured a chorus girl named Valerie Harper in an early role, plus Paula Stewart as Wildy’s sister. Unfortunately, Ball hadn’t reckoned on the strength it took to power a Broadway hit eight times a week, and she fell ill, physically and emotionally exhausted from the demands of the show and her divorce. On May 24, 1961, following a two-week Florida vacation that didn’t take, Ball gave her final performance and the show closed soon after. Fortunately, there’s the original cast recording to enjoy, and Web surfers can find Ball and Stewart performing the show’s hit song, “Hey, Look me Over” in a fabulous clip from The Ed Sullivan Show on Google video. Ball and Stewart became friends; she introduced Lucy to her second husband, Gary Morton, and, after leaving show-biz and becoming an interior designer, created Lucy’s New York apartment in the 1980s (Lucy wanted to have a place to stay when she visited her grandchildren on the East Coast).